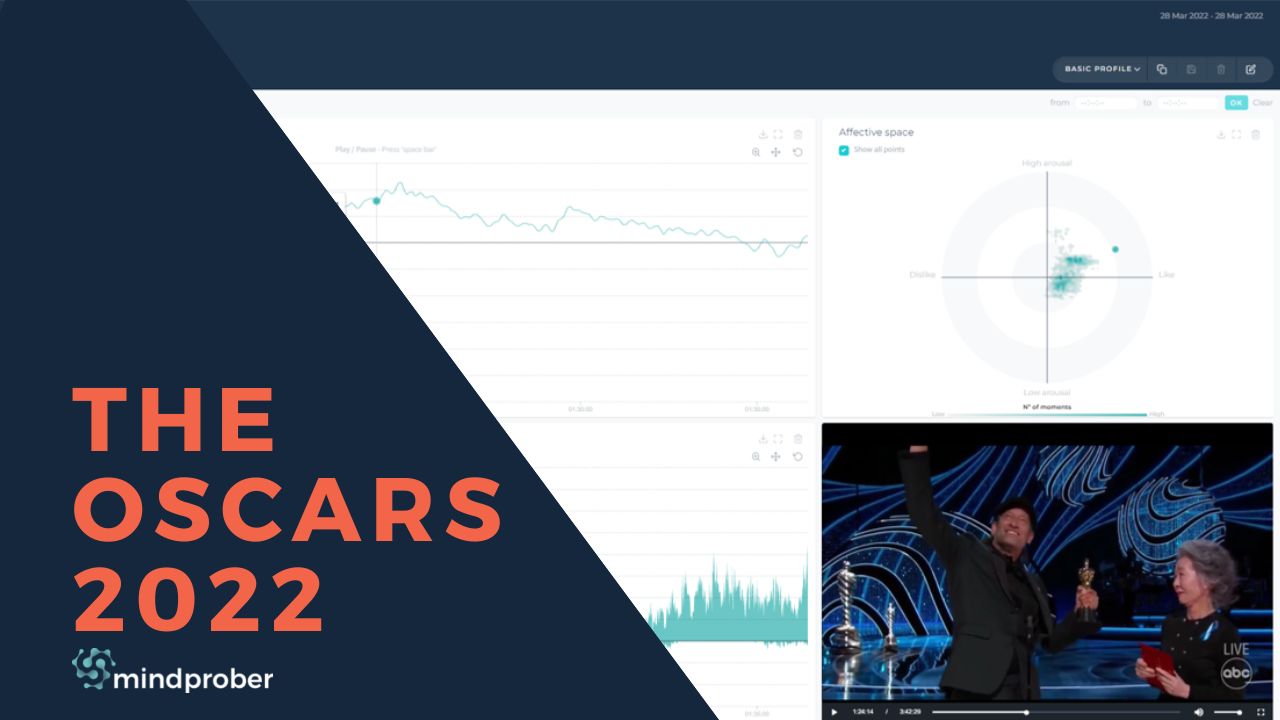 The Oscars 2022, wow, what a night! While probably most of the public is focused on the infamous slap event and all the drama that unfolded after the 94th Academy Awards, there is another story worth sharing. A story about true audience engagement. And while the slap might have all the media attention, it wasn’t the most exciting moment of the ceremony. In fact, it didn’t even come close. The MOST EXCITING moment at the Oscars 2022 is a story of joy and overcoming the odds. But let’s not get ahead of ourselves.

What you’re about to read is science and data supported. Why share such important findings? Because what we do ultimately is trying to better understand human behavior and the emotional processes that occur when people are exposed to media content. And when we learned that people were more engaged during one incredibly special moment of the Oscars, we all agreed that the public could use some guidance to see what were the things that really mattered.

What kind of data are we talking about?

We’ll keep it short and tell you about our technology and methodology in more detail some other time. For now, we think it will be enough to say that we collected the implicit, emotional reactions and declarative responses or dial from a home consumer panel in real-time during the Oscars.

In other words, we measured how people feel and whether they liked or not what they were seeing.

Once gathered, our platform used the data to calculate and create the audience engagement timeline of the show and the emotional impact value of each event.

Troy Kotsur! The moment when Mr. Kotsur was awarded the Best Actor in a Supporting Role award for his amazing performance in CODA and shared his experiences with the audience was officially the most exciting and engaging moment of the 94th Academy Awards ceremony.

During this ‘event’ as we call it, we saw the largest density of responses in the entire show and an upward trend of emotional arousal. From the moment Youn Yuh-jung announced Troy’s win and throughout his presence on the Dolby Theatre stage, the audience showed that it was highly engaged with this powerful moment.

Troy Kotsur’s life, work, and journey are motivating and inspiring.

The impact and power of this moment on the audience, the Deaf community and culture, and the world are undeniable.

Other engaging moments of the Oscars 2022

While we said that The Slap wasn’t the most exciting moment of the Oscars, it would be wrong not to say that it was a highly emotional event for our audience. When Will Smith approached Chris Rock, we saw a spike in the audience’s emotional arousal.

However, the level of engagement with the event was much lower than what we saw during the rest of the show. It’s possible that the audience was either in shock or trying to understand if it was a genuine moment or part of the act – like most of the audience at the Dolby Theatre – and was not responding explicitly to the event.

And we simply must mention the power of the co-host trio that created the initial peak of emotional arousal, building on the audience’s expectations. The night’s fantastic three co-hosts including Amy Schumer, Wanda Sykes, and Regina Hall grabbed the attention of the audience more and more as they were playing out their opening script, reaching a peak during their comic accolade for Samuel L. Jackson’s work. Amy Schumer’s opener and Regina Hall ‘COVID testing’ Jason Momoa and Josh Brolin certainly heated things up, and that is now a scientifically and data-supported fact.

There were of course more moments when the viewers were engaged by the content, including the dazzling and colorful performance of “We Don’t Talk about Bruno.” Other moments had quite the opposite effect and people seemed to have drifted off completely. But let us focus on the memorable moments for now of the show that will go down in Oscar’s history.

Emotions drive and impact, at the unconscious level, every aspect of our cognition and choices. In the context of media content, emotional responses to an event tell us that the viewers are engaged by the content, making it more memorable and motivating towards action.

The Academy Awards is an event that the entire world looks forward to. Whether it’s the awards for formidable cinematic performances, the show’s host’s openers, or other historic, most exciting moments, the Oscars grab our emotions and attention, making the world stop for more than just those 3 and a half hours.

Interested in how broadcasters, producers, and brands are improving their media ROI with the MindProber platform?

Visit our resources page and download our FREE Case Studies.

MindProber is sponsoring the Neuromarketing World Forum in Berlin, 28-30 September